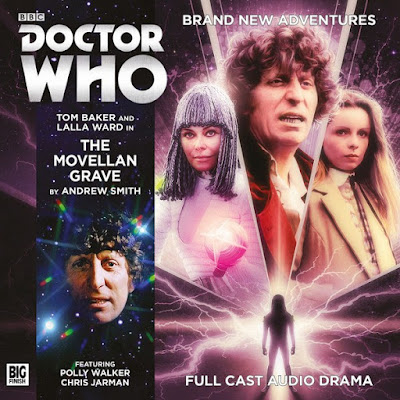 Oh dear, archaeological digs in the doctor who universe usually do not have happy endings. Actually that is slightly off, they normally end well thanks to The Doctor but the road to that end is generally a rocky road paved with human debris. This particular dig uncovers a Movellan spaceship, long buried in the ground, but still viable, which is to say about to become active once more. Bloomin' typical is it not, you do not see a Movellan for more than three decades and suddenly they are all over the place. well, a blink and you would miss it appearrence in the recent Doctor Who episode The Pilot and now a Big Finish Doctor Who fourth Doctor Season Six Story. Hardly all over the place, I know.
The Movellans being a robotic race are not only long lived but they are also capable of shutting down and sleeping even longer. Perhaps a skill realised in their conflict with their nemesis creator Davros. According to Who lore the Movellans are the enemy of The Daleks. But then again who is'nt. The enemies of The Daleks; that is one long list. The daleks are not discriminating about who chooses to call them enemies. They hate just about everyone. No, scratch that. They hate everyone. At some undetermined point in their mutual combat they find themselves in something of a stalemate. Two evenly capable opponents with shields locked. the doctor suggests this is because of the Movellans and The Daleks shared robotic nature. I think this is something of a mis-statement on his part. The Daleks are not robots. They may chose to make their homes inside retro-Kaledian travel machines but that is more an alien aesthetic choice. Daleks are actually squirming balls of living hate. Which are in fact the words Dalek mothers use to stitch into the name tags of their off-springs gym shorts.
Oddly, or perhaps not-so, The Doctor first encountered the Movellans during another dig, that one taking place on the planet Skaro and what they found there would have been best left in the dark and forgotten about; Davros himself. I have fond memories of that story. with The Tardis landing in that chalky canyon, the ominous rumbling and thumping from beneath the ground, with Lalla Ward every inch The Time Lady years before Jodie Whittaker was a twinkle in Chris Chibnalls eye. ( You see, it does work!)I remember how exotic and snooty The Movellan's came across. I never considired them a worthy adversary for the Daleks, unless it was in a dance off. It was as though Hot Gossip off The Kenny Everett show were to take on the Nazis. I was constantly expecting them to bust a few erotic dance moves in the sand dunes of Skaro. I also thought the corn rows were not as cool as full on dreads, I much prefer the scruffy knotty kind, like old frayed rope. I thought them more Sister Sledge than bad ass droids.I apologise for that. The expression "bad ass " feels entirely forced and unnatural to me.
Its a great adventure this one, with archaeologists on the hoof being pursued by a huge killer Movellan who does come across as a suitable opponent for the killers from Skaro. A pursuit done in an eighties British stylee. Very Doctor Who of that period.
Which is more than we can really hope for. 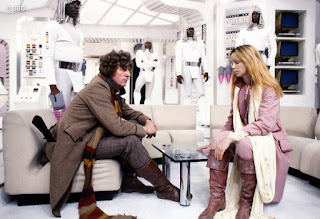