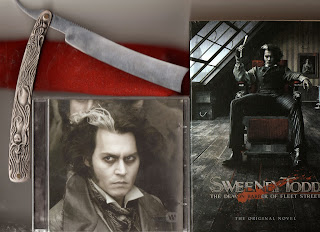 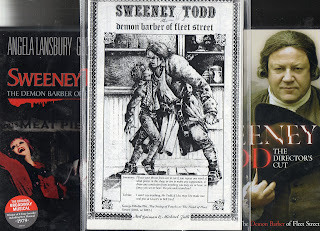 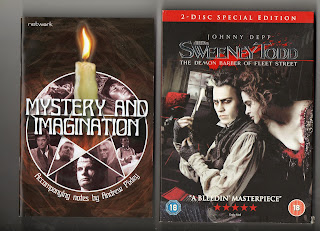 Was feeling a little down in the dumps the other night(post Halloween blues.) so I put on Sweeney Todd The Demon Barber Of Fleet Street to cheer myself up and it worked a bloody treat. One of the great Burton/Depp collaborations, I wish more people would give it a shot. Johnny has never looked better; so haunted and heart broken( although I will always have a soft spot for his Mad Hatter. I am convinced that Top Hat of his was a Tardis which had a functioning chameleon circuit.) And although it does not exactly have a happy ending Sweeney does get his revenge on those who wronged him;in sprays of arterial blood inbetween seventies Bowie Impersonations. Helena Bonham Carter makes a great Mrs Lovett The Human Pie maker. She just about gets the best exit in a musical ever. It is eye-poppingly gruesome.
Enthused; I dug out a few other bits and pieces related to the dark tale of Sweeney Todd. My house is a bit like Steptoe and Sons. You just never know what you are going to find. I was not even aware I was so keen on the story of The Demon Barber and its various incarnations. Amongst some other bits and pieces I found a dvd copy of the stage play, with Angela Lansbury(yep, Old Jessica Fletcher herself). To me Landsbury will forever be The truly sweet and truly doomed tragic figure Sybil Vane in the film The Picture Of Dorian Gray. I also found a version of Todds tale starring Freddie Francis in a totally bonkers Hogarthian nightmare version for a seventies horror show Mystery And Imagination. Each version dipped in blood and its own originality. Bringing something different to the table to be served with gravy.
I even found a replica cut throat razor blade as the one used in Depp's version which I store in a drawstring red satin pouch. What gentleman does not carry one of those?
Now all I need is someone who trusts me enough to give them a really close shave.
And to think my favorite musical as a child was Oliver. FOOD GLORIOUS FOOD!There is just something about the cobble streets of Olde Englande that lends itself to musical fantasy. Maybe it is time I finished my Jack The Ripper musical The Scarlet Fandango.
Wonder if Ryan Kwanten can sing and dance.
He can walk on his hands.
Which is pretty close.
OH FOOD GLORIOUS FOOD!